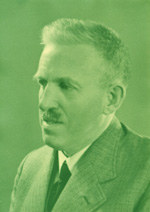 The inventor of the Klavarskribo music notation was Cornelis Pot (1885-1977).
He tried to make a drawing, a sort of map of the notes he had to play.
He considered the complicated encodings of the traditional music notation too difficult to read and wanted to decode them once only and then map them in a readable way.
He was aware of several proposals to improve on the traditional notation and was very interested in the subject of pure tonalities. He studied these with the use of logarithmic slide rules and a tone generator he constructed. This allowed him to listen to the differences in pitch that occur between the many different pure intonations when playing a violin or singing. He began to understand that these very many pure intonations can be made by the performing musician by ear only. The flats and sharps of the traditional notation cannot help him do this.

Often Cor Pot was amazed that Bach in fact did away with these tonalities by limiting himself of the use of twelve tones per octave, like on the keyboards of pianos and organs, but without adapting the notation. That is what Cornelis Pot did in 1930 with his invention of Klavarskribo, which means 'keyboard script' in Esperanto.

The big day was to be november 1, 1931. The music reviewers of the big journals and newspapers were invited to see the new music notation, complete with scientific background, logarithms, millioctaves and all. They admired the music writing machine, connected to a grand piano.

In an old post office, three man then started to work on the translation of traditional music into Klavar. However, the Klavar music books did not sell at all. Cor Pot had thought that the new notation would explain itself, but learning to play an instrument requires teaching. Waiting for the introduction of Klavar by music teachers took far too long. Thus the idea came up to publish correspondence courses, as had been done already in other countries. Although born of necessity, these were an instant success. The survival of Klavar was secured.
Since then, a large part of existing music has been published in Klavarskribo.
Courses were given to children and adults, to singing classes and concert bands.
Concerts were organized for the pupils, first in Slikkerveer and later on in the concert halls in Rotterdam and Amsterdam. Highlights were the 'on sight' singing by a school class and Grieg's 'Honor March' by the Slikkerveer Harmony.

During the war people stayed at home and many made music. By the end of the war all Klavar music was sold out. Other interests competed for people's attention, like cinema, theater, and TV. But Klavar had found its place.

Cornelis Pot managed the affairs of Klavarskribo himself till the end of his life. But long before, with much foresight, he had written in his will that Klavarskribo would be embedded in a foundation after his death. And so it happened.